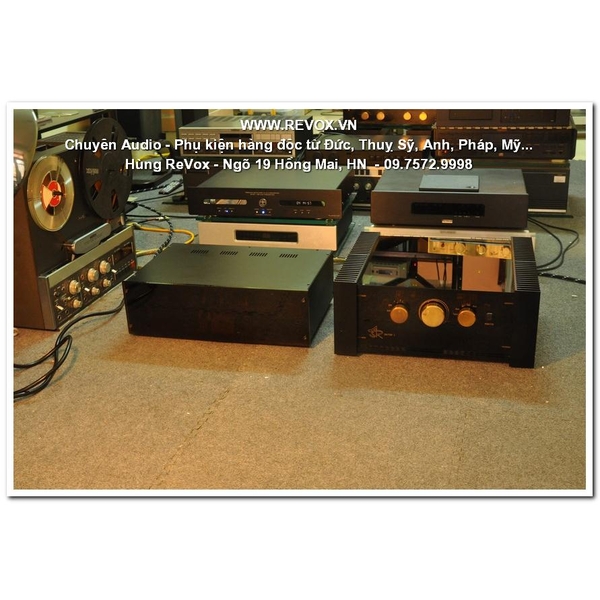 It has been my privilege to have owned or even reviewed some great integrated amps; including a couple from a McIntosh and a couple from Creek, the Joule-Electra VAMP, the Electrocompaniet ECI 5MkII, the Allnic T1500 300B single-ended stereo integrated amplifier, the Plinius 9200, and the Oracle Audio Technologies SI 1000 integrated amplifier. As great and wonderfully built as some of those amps are, none of them are any way built like the ASR amp. I’m not saying none of them sounded as good, we will get to that later, just that the build quality, the parts, and the engineering are just at a whole new level with the ASR.

ASR was founded in 1980. They initially offered four products: the Emitter I and II amplifiers that come in multiple versions, as well as two phono stages. For the 30+ years of their existence, ASR has been tweaking and upgrading these remarkable amps. To me, this speaks volumes about ASR’s almost fanatical attention to the detail. Over those thirty years these two amps have become some of the most technically advanced amps in all of the audio high end kingdom.

Let me say one more thing before we get into the description and setup sections of the review; this is without a doubt the best solid state amplification device I have heard. I say this here at the start of the review so if you get the idea early in the review that I hate this amplifier, you will know it’s a profound love/hate relationship. This is so true that I started to wait and do the Description and Setup sections at the end of the review. I decided not to because I wanted to end the review on how great the ASR Emitter One Exclusive is, not how frustrated I was with it at first. With that said, let’s get on with the review.

As I noted above, ASR makes a few amplifiers, within the Emitter I series and Emitter II series; both are available in “Exclusive” versions, which adds an extra battery operated power supply designed to free them from the adverse effects of using alternating current. If you want more technical information about the Emitter II Exclusive ($27,700 with battery) and how it differs technically from the Emitter I, so I will not attempt to do what they have already done beyond my technical expertise.

So far, I have resisted calling the Emitter I Exclusive an integrated amp; ASR prefers to describe their amps as main amplifiers with input selectors and a level control. There are also no pre-amplification parts built inside any ASR amplifier! ASR designs their amps with large, high quality transformers that are installed in separate casings. They claim this design eliminates electro-magnetic fields and vibrations from the amplifier itself, and further claim that this is the essential element in the calm and relaxing sound of ASR’s amps. The amp is equipped with a power supply circuit with a buffering capacity of more than 1.3 farad, and also uses very fast rectifiers. This is done so the power supply will remain stable under extreme conditions. ASR builds the surround cases of the control unit out of solid acrylic glass, which they feel is audibly more neutral and smoother sounding than metal cases.

The ASR’s front panel is very expensive looking, if at the same time somewhat utilitarian in appearance. It has a large LED display which is essential in the operation of the amp, and three large silver knobs dominate the front panel. The larger center knob adjusts VOLUME; it uses 32 stepped relays in 1dB increments over a total range of 75dB. Unlike conventional volume pots, the music signal does not pass through the volume control at all according to ASR. They claim their volume control has no sonic impact upon the amp’s performance regardless of setting. Another benefit is that channel-to-channel deviation is less than 0.1dB at all settings.

To the right of the volume control is the SOURCE SELECTOR knob, and on the left is the POWER ON/OFF knob, which has four settings. There’s Off, Standby, and position 1 and position 2. Position 1 fires up the amp and puts it into energy-saving mode which allows a volume range from 0-61dB, and runs the output devices at half power. Turning it past 35 on the display disables energy saving and puts the amp in full-power mode. Position 2 automatically switches the output devices to full-power mode and allows a volume range of 0-76dB. Because none of the three rotary controls are motorized, the indents on the knobs will obviously not move when adjusting volume, source or power status. Instead, the main display and a series of LEDs surrounding each knob will indicate the proper status. Power: 250w x 2ch